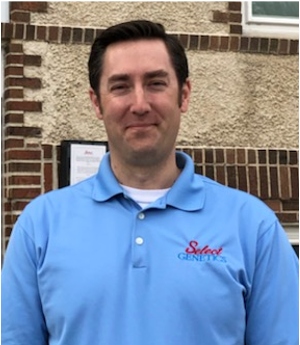 CoreyNelson grew up in Kandiyohi. After high school, he earned his BBA with a major in Finance at the University of MN, Duluth. Afterwards, Corey moved back to the Kandiyohi/ Willmar area to start his career. A few years later, he earned hisMasters in Business Administration at St. Cloud State.

Corey began his poultry career with Life-Science Innovations/ Willmar Poultry Company. He has stayed with the company in different roles through different acquisitions, mergers, and name changes. His business card has said Life-Science Innovations, Willmar Poultry Company, Ag Forte and now Select Genetics, but he still works with the same great people and in the same office he started in when he joined the company in 2007. He started in cost accounting, spent a couple of years in software support and has spent the last 6 years working directly with the breeder and hatchery group as the Controller/Administrative Manager.

Corey and his wife Elissa have two beautiful girls, Lola (10) and Greta (8). In the summer months, Corey enjoys spending time outdoors. He likes to get out on the golf course as much as he can, but his family also enjoys spending time on the lake or camping. In the winter months, their kids keep them busy with their school and athletic activities. Corey also enjoys watching the Timberwolves andVikings on the weekends.